I am a caretaker.

The world knows it.

I am everyone's Mamma.

I think my breaking point was one ridiculously hot day in the beginning of August when I "mamma-ed" a new co-worker cautioning him on the hazards of riding in the back of the mail truck that day, and then followed it up with "Because I'm everyone's Mamma... and we need you alive to deliver packages at Christmas".

At that moment, I realized it was time.

Mr. Chewey Cat has been gone now for about a year and a half.  In the beginning the thought of another pet was unbearable, and to be honest, not having to worry about him all the time anymore was freeing.  His renal failure came on quick, his behavior became erratic and we were pretty sure he'd had multiple strokes.  But, time has past... 18 months worth... and it's apparent something's missing here.  And with the boys becoming more and more independent, I'm clearly subconsciously seeking something to take care of.

We're getting a dog.

I debated getting an Alaskan Klee Kai from a breeder.  I joined the National rescue, since I wasn't looking for a puppy anyway.  Turns out even the rescue only gets about 5 per year, and the waitlist is years long.  With my history volunteering at the Humane Society, I knew a puppy from a breeder was just not for me.

So I turned to Petfinder, which has proven to be more than frustrating.  It is rarely updated so most often you are inquiring on dogs that have already found homes.  Plus you need to be pre-approved by each center, so odds are the dog you're looking for is at a different one that where you've been approved, and you have to apply all over again, and by then, that dog is gone. *sigh*

Then I found a BEAUTIFUL dog, Tristan, on the Ft. Benning Shelter's Facebook site.  We were all set to go with him until I realized it was going to cost $1,500-$2K to get him here from Georgia, sight unseen.  I tried every available option I could think of, including driving 20 hours down and 20 hours back over 3 days to get him. In the end, I just kept thinking, If we are the right family for him, it wouldn't be this hard. So I made the hard choice to let him go.  His perfect family is out there, just not with us.

In the meantime we started getting the house ready.  We put up a zip line run for easy escape into the backyard. We bought bowls, a leash, and lots and lots of poop bags. Knowing we wanted a Husky, we knew we would need a fenced area to play off leash since they tend to run, and the 3 foot chain link we currently had was just not going to work.  If you've been around a while you know we've slowly been replacing the fence with custom pressure treated along the driveway and the back, but I knew there was no way we could afford to keep going at 6-8 feet high throughout the rest of the yard.  So we compromised.  I finished the driveway side with the pressure treated, and we did the kennel area with 6 foot stockade that was on clearance at the Depot... 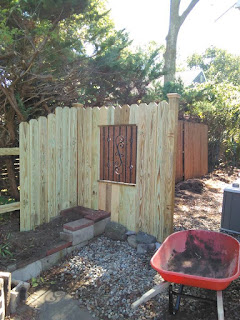 Of course, we had to have a doggie window.  I did a ton of research and ultimately came up with this. It's stair balusters sold open stock at the Depot.  Way less money than a custom panel and I could make it any size.  The process has been painfully slow but we were getting there... 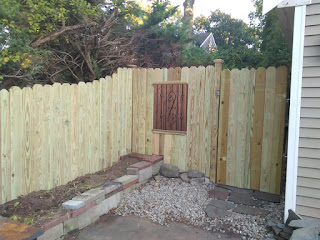 The wonky decline in the fence on the left has been fixed since this picture, I assure you.  Funny, I look at this picture and think, was I drinking??? But, no... I was just tired. Anyhoo...

We just kept going on the Field Of Dreams premise that if we built it they would come...

In the midst of all the building, our dishwasher died. This past Friday, the husband was installing a new one, going up and down stairs for this tool and that, cutting the breaker, etc.  Frustrated that he could not find the teflon tape, he decided to look one more time in an odd section of the basement in an old red tool box.

That's when he saw him.

An orange and black cat.  Crouched in the corner.  Just looking at him.

The husband insisted he did not leave the door open.  The last day the door had been left open unsupervised was Monday when I fixed the wonkiness in the fence, four days earlier.

Yet here's this cat.  Just hanging out in our basement.

We have no idea how long it's been there or how it got in. But when the husband opened the basement door, he bolted.  Ironically the neighborhood cat, Lyra, has been coming around the last few days crying a lot, which she hasn't done since Chewey left us.  Maybe she was trying to tell us something like...

Just not the he we expected.

***Note:*** We are not keeping the stray cat.  He's off happily causing chaos elsewhere.  For now we have finished the kennel as much as we can, ordered a crate, and are crossing our fingers all goes well at our second meet and greet with a certain 4 year old girl...

It's Me! In Your Inbox! No Stamps Required!