"Social media is a weird thing. Ova' hea' I try to keep it happy, a wee bit sassy, and mostly real. It's no secret we've had great things going on here, and undoubtedly with graduation, prom, college (for 2), house hunting, etc., there will many great things posted. But make no mistake, there are many struggles in between those things. BIG ones, little ones, ones that I saw coming, others that blindsided.

Parenting, at any age, for any age, is HARD.
About a week ago, in a moment of parenting fail and frustration, I mumbled something about "Whatever, you guys never listen to me anyway", I heard it.
In a low voice from the kitchen, a manner in which he wanted me to hear but not really, came "I ALWAYS listen to you Mum. Even when you think I'm not, I always HEAR you."
It can't always be the BIG things. Sometimes it's the tiny things in parenting that keep you going. It's a new week Moms and Dads (of all ages), they see you. They HEAR you. KEEP GOING."
-Me via FB May 2019
I wrote that 2 years ago. Face book, lately, has a way of throwing my words back in my face. Sometimes it makes me laugh, other days it makes me reflect. Today was no different.
Last night Youngest stuck around the house to make dinner. Instead of grabbing a snack and heading to his room, he cooked an actual meal in the kitchen for himself. While few words were said, they resembled words that night instead of mumbles. My suspicious nature in with an equally short comment. His reply was he was trying to be here, to interact while we were all home. Shortly after putting his chicken in the oven, a new friend showed up and they headed out to the garage. Most of the time these kids head straight for the garage, but this one came in first. Youngest introduced us, as his family, which hasn't happened in some time.
Today he sat at the kitchen table after work, logging his stock inventory. He's applying for an LLC. He asked a few questions regarding his product. I answered the best I could. I asked if he'd looked into the liabilities he would be responsible for. We discussed other options for sales and revenue than a full on start up right now. He clearly was thinking the process through. He wants a legitimate legal business venture, and I think he's starting to see why he needs an education, and why his original plan, while legal, could be problematic.
Our meeting with the college went well. He is registered for the fall, full time, 2 days a week, which leaves plenty of time for friends and work. He adamantly did not want to do a class in the summer, because he wants to enjoy his last summer. As if he hasn't had 6 summers already. Today I told him that while I heard him, I just wanted to show him something on paper. I explained that because of his 2 AP classes from high school, his fulltime status in the fall, and their 10 day course option for winter break, if he did the one English class, on Monday, from 9-1 for 6 weeks, by January he'd be half way through his associates degree. It would put him right back on track with all his friends, fast track his goals, and since his friends don't even get out of bed until 2 anyways, he'd miss out on nothing.
His eyes opened wide.
I'd like to say that he stayed sober the rest of the day, but he didn't. He did manage to get a night of jujitsu in and when he returned home I let him know that I sent his AP scores to the school. He thanked me before heading back out, took his meds, and assured me he'd be home before the door was locked.
My son is in there somewhere.
He can hear me.
We just have to keep going.
at May 05, 2021

If You Give A Girl Some Plywood....

She'll probably want some two by fours to go with it. We live in roughly 900 square feet.  The basement, which technically adds an addi... 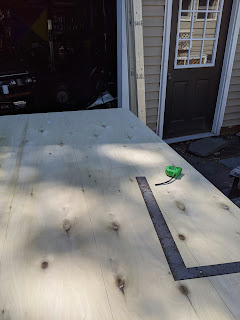