I'm hiding away writing for a bit today.

I have already been thoroughly drenched by the morning's rain while attempting to walk the dog and running a few errands before my doctor's appointments start later this afternoon. I say attempting because she was adamant that her Dad walk her this morning and I was literally dragging her down the street in protest at 630 am before finally caving and bringing her back, soaking wet, to his bedside. But mostly I'm hiding from my husband who has relapsed into another mysterious illness, for day one of his vacation, rendering him unable to help with his normal sidekick duties.

It appears that when you tell the whole world to wear a mask for a year and to stay inside whenever possible, that the minute you tell them they can resume a normal life, the germs do as well.  And when that announcement corresponds with pollen season, it will not go well.  Oldest ended up with a sinus infection, Youngest, walking pneumonia, and for myself and the husband, bronchitis.  My cough still persists, mostly due to post nasal goo. The husband's antibiotics didn't work, so he returned to the walk in clinic yesterday for a reevaluation.  They found a spot on his lung that they are treating as pneumonia even though they can't hear it, and are hoping it just goes away. Seriously... this is the medical advice one gets with GOOD insurance. *sigh*  So he's binge watching excessively loud TV shows making it impossible for me to concentrate, sleeping alone in the bed so I don't wake him up unnecessarily, and gasping for air when the coughing gets excessive.

Oldest recently revamped his dating profile on Tinder, adding more humor and a few buzz words indicating he was not looking for a casual thing in the hopes that he could narrow his field a bit. Tings like not looking for anything serious, just a wife and two kids... and fluent in English, sarcasm, and superheroes. The next day he got a reply from someone, also not looking for anything  serious, just a husband and two dogs.  They have talked everyday.  She had changed her radius, as she was vacationing on the Vineyard, and had found his profile since we are within an hour of there. He went to visit her for the day and they hit it off.  Her Mom allowed her to change her flight out at the end of their month long vacation to include a small detour in Boston this upcoming weekend so I will get to meet her this weekend. As it turned out, she lives 30 minutes from where we are vacationing in August, and she's coming back in October to see her best friend in Boston who is attending school next door to Oldest's University. Currently she is headed for college in California, but being that her first choice had been Suffolk in Boston, if this continues through Christmas, I suspect we have not seen the last of her. Part of me wants him to proceed with caution, the pother part of me thinks this could be really good for him.  We'll see how it all pans out.

Youngest's lungs are clear, and a visit with his regular doctor has confirmed that his daily vomiting is in fact Cannabinoid hyperemesis syndrome or CHS.  And because he won't quit smoking, he's now on another pill twice a day to limit the damage that regular vomiting does to the body in hopes that he will come to his stupid senses sooner rather than later.  He and the girl have finally split for good this time I think. He's stopped working in the ice cream place, which is good, but hasn't looked for another job, which is not good.  He continues to work for door dash, which brings in money but has no set routine which is what he needs. He continues to tell me he's doing his schoolwork, logging in on time, and completing most of his assignments. In September he will be in person, fulltime, for school which will provide some much needed routine and hopefully some new, drug free, faces. He's been all over the map lately between wanting to be part of the family and being a total jerk. He didn't come home again last night, calling me to let me know, so I could take my cough medicine to sleep soundly which was considerate, but then we found him sleeping in his car at the pond this morning, which was stupid. Some days it's easier to shake my head and walk away. I texted him to ensure he was alive, got a text right back, sent another to see if he was coming home soon, and got no response. It's been 2 hours. There's a huge part of me that wishes we lived where he could afford to be on his own. Or, that I could afford to buy a small investment property for him to rent from me. Our relationship would be much better the less I know. But until the market crashes or his frontal lobe develops, I guess we'll just keep playing the lottery.

So, yeah.. currently hiding away in my bedroom attempting to block out the noise inside and outside my head today. I may take a stab and working on my niece's t-shirt quilt as the day progresses and the house fills with even more noise.  My work space is in the basement which is quiet, and I need quiet, especially as it's my one day off for the month, and at the rate I'm going I'll get nothing done unless it's behind a locked door and padded walls.

The Rest Of The Vacation....

When I left you last, we had turned a corner.  Cross country travel with adult children is now out, as are excessively over priced meals an... 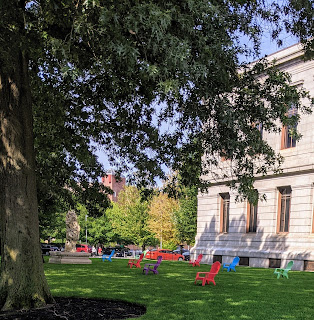